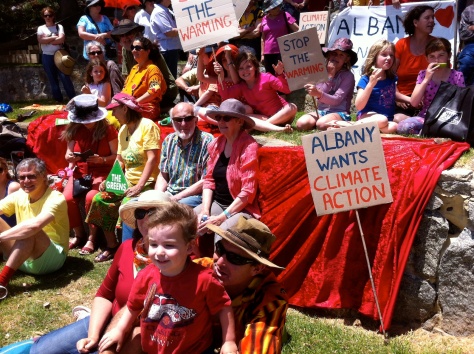 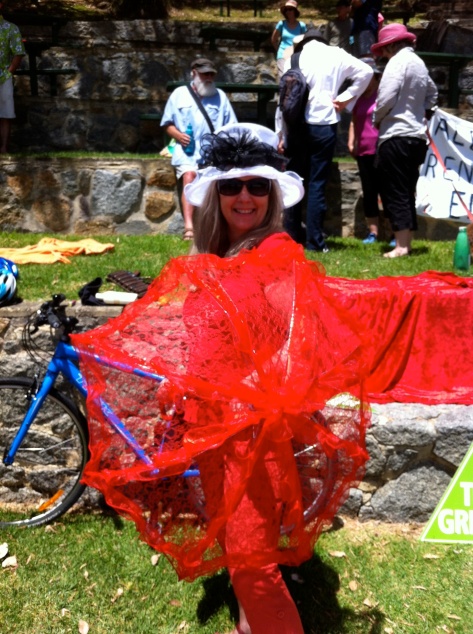 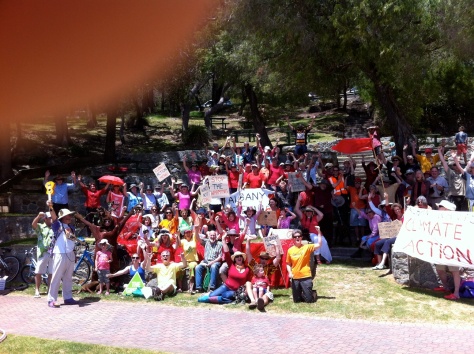 Over 80 people turned out on a sunny Sunday in Albany to join the national chorus of concerned citizens who are demanding that the Abbott Government takes real action on climate change – now! 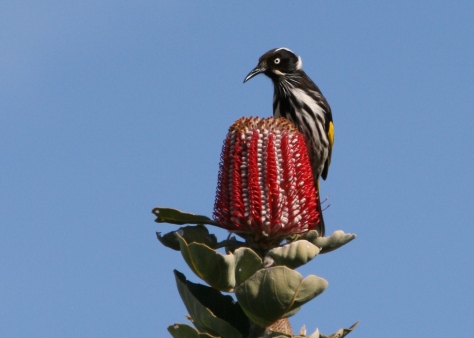 Regular convenor’s reports are a review of the past year’s activities, with some sort of rallying call for the year ahead. Well, I’m not (and have never pretended to be) a regular convenor, so that’s not what you’ll be getting here. I apologize now if you find that upsetting – or confusing.

Those of you who know me – and voted me into this position – know that the strength of my passion and commitment to the ACEC is, perhaps, only matched by my propensity to get distracted, disheartened or disturbed by non-core people or events. What does that all mean, you might be asking?  Can I suggest you convene a meeting, at a time convenient to you all, in order to discuss it and come to a consensual agreement about exactly what it might mean? And then, when you’ve done that, let me know – and I’ll tell you if you’re right… or not.

As part of settling back in (yes, I have been here before, several times) to the role of Convenor of the ACEC, I thought I’d have a look at the ACEC blog, to see how it was going. And, amongst other things, I found this entry, from almost two years ago.

Along with a summary of other stuff we achieved that year, it also mentions some of the actions we took in opposition to the proposed Bayonet Head residential development. Two years later, I find it heartening to recall the size of the crowd we gathered at the rally and to reflect that the proposal still hasn’t gone ahead. Re-reading this post also serves to remind me that we need more members!

So if you live in or around Albany and you support what we stand for, please join us, and invite your friends to join, too.

“Since August last year, we’ve had film nights, guest speakers such as Murray Gomm from Albany Bicycle Users’ Group, Kristy Robinson from the Environmental Defender’s Office, and Peter Kenyon, from The Bank of I.D.E.A.S., who kick-started our Transition Towns group. We had a stall at the Albany Show, well done Helen Knewstub for driving that.

The largest undertaking, in terms of time and effort, during the past year or so, would have to be the “Jobs From Waste” initiative that was instigated by Steven Jennings. First Helen and then, (when she was poached by the City of Albany – congratulations, Helen!) Steven have been coordinating the overall initiative, while a separate part of this initiative, focussed on the Tip Shop, won funding support and was subsequently coordinated by yours truly. 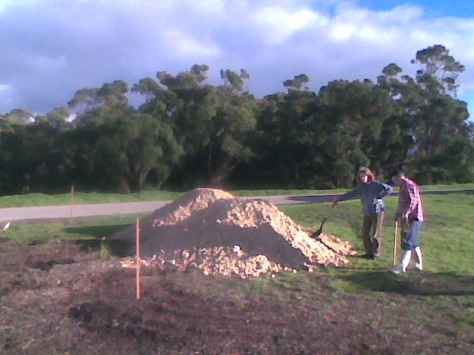 former Convenor and current committee member extraordinaire, Helen Knewstub, and continuing Convenor, Peter Morris (in the white boots!) discuss exactly where they’re about to shovel this pile of… lime. We were later joined by a welcome posse of ACEC committee members (and one spouse thereof). This was in preparation for the (thwarted) Tip Shop project.

Before I conclude this report, I’d like to mention a few other groups and events that happened or are persisting in Albany, independent of the ACEC, yet congruent with our aims and values. During the past year (or so) there has been a “tck, tck, tck” rally, a couple of Get-Up get-togethers, a 350.org vigil about climate change and a rally and “non-march” opposing a local residential development on high conservation value remnant bushland. All of these events happened independent of the ACEC. Sure some ACEC members may have attended some of them, but my point is that there are a lot of people out there who we should consider allies in the fight (and it is a battle!) to conserve what’s worth conserving, and to steer Albany towards a sustainable, low-carbon future. 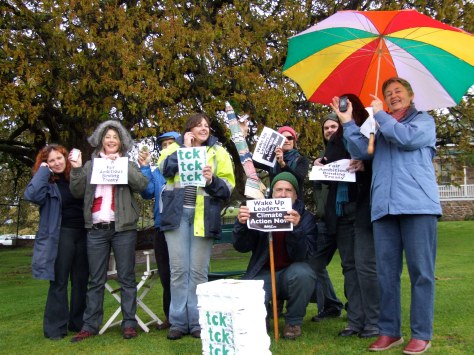 two groups of people; one large, one not-so-large, both committed to Albany as a smart and sustainable city.

Other groups like the Wildflower Society, the Bushcarers’ Group, the Albany Bicycle Users’ Group, and the Urban Design Forum group are all making significant and positive contributions to the real wealth of Albany. The Rainbow Coast Neighbourhood Centre’s Community Garden is growing from strength to strength. Even a group of teachers and parents from the Albany Primary School have been doing fantastic things around recycling, waste minimisation, renewable energy and organic food growing!

So now what? That’s up to you, and whomever else you can persuade to join you in an action that will progress Albany towards real sustainability. If you’d like the support of the enormous (kidding again) resources that the ACEC can bring to bear, bring your ideas or concerns to a meeting or send us an email at this address, or leave a comment on our web page – www.albanycec.wordpress.com

Please give us your support – the possums will love you if you do!

The WordPress.com stats helper monkeys prepared a 2012 annual report for this blog.

some cycing inspirations from around the planet

Save our cockatoos from starvation | Conservation Council of Western Australia.

ALERT! Denmark’s fantastic Centre for Sustainable Living is under threat! The Denmark High School has presented the Centre with a “notice to vacate”. BY JUNE 30, 2012. The accompanying letter also states that “in the Department’s view” the 15 year lease is “no longer valid”.

What’s going on here? No consultation, no imagination, no thought for the future of an outstanding community asset, that’s what.

Or/and write a letter to the editor of your local newspaper.

The speakers are very engaging and knowledgable. Definitely worth getting involved if you have the time. The panel would be a great time to talk about practical changes we can be involved in. 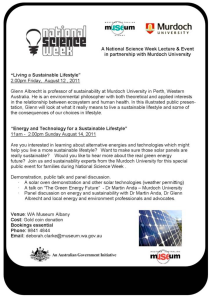 a not-for-profit group of Albany people, empowered by a shared vision of a sustainable Albany